Remember the rice, water and love experiment my granddaughter and I did in January? We didn’t stop there. We extended the experiment into February, with one difference: Instead of cursing the second jar and ignoring the third, we (or I most days) spoke only kindness to all three.

Here’s how the rice looked on February 2.

3 jars of rice and water from the January experiment, each at different stages of fermentation and/or rot on February 2

The third grader held her nose when we checked on them, even before we lifted the lids. Her little sister wouldn’t come near them. When we opened the jars, we both squealed and gagged, covering our mouths and noses. The jar on the left, the “love jar,” didn’t seem that bad to me, wafting somewhat vinegary and sweet as it had a few weeks ago. The child disagreed. “It’s disgusting!” To her, fermentation smells no better than rot.

How the experiment changed in February

As you know, we started out in January with three identical jars of rice and water. Throughout January I spoke loving thoughts to the first jar. I’ve taken to calling it the love jar. The second jar received mean thoughts. I had trouble with that at first and eventually settled on “You idiot!” Hence, for purposes of this article, it is now the “idiot jar.” Following Dr. Masaru Emoto’s experiment in the film The Secret of Water, I ignored the third jar completely, neither looking at it nor speaking to it.

What was different this time around? In February, I projected loving thoughts toward all three jars, exactly the same each day.

Mid-month, the “love jar” appears to be fermenting still, while the water in the other two jars grows more brackish and fetid

At first, I planned to use the simple word, “Namaste,” with hands folded and a bow, just as one does after a meditation. Self discipline in short supply, apparently, I lingered longer than the single word would allow. Every day, in addition to bowing to the rice (Crazy-sounding, isn’t it?) and speaking the word, I also sent loving thoughts and gratitude, spending two to three seconds with each jar. Oh, and I smiled affectionately too. Couldn’t help that. Kindness almost automatically elicits a smile, wouldn’t you agree?

A wrinkle in intent

It took me to mid-month, to get comfortable with those thoughts, acknowledge them, much as one does in a meditation, and let them pass during my brief daily homage to the jar’s contents.

What happened to the rice and water?

Here’s how the jars appeared on February 27, near the end of the month. As you can see, this photo is nearly identical to the the two above, taken February 2 and February 13, respectively. Even the ripples around the edges retained much the same shape. 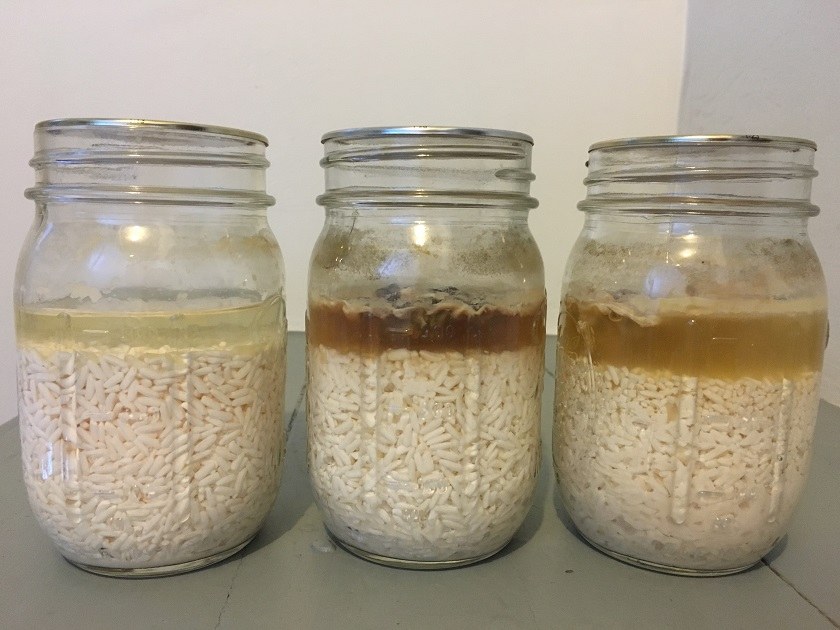 The same 3 jars of rice and water on February 27–the rice and water have a pinkish cast and are getting a little mushy on the bottom, especially the third jar on the right

Surprisingly, very little water evaporated. In fact, the third jar contains more water. Could off-gassing as the rice broke down increase the water volume somehow? Why only in this jar?

Below the surface, as visible from outside the jars, the rice and water did not appear to change a whole lot either. All three developed a ring of mush at the bottom–just a little in the love jar, more in the idiot jar and nearly twice as much in the previously ignored jar. In addition, some of the rice in the jars took on a faintly pink tinge.

This slideshow, of the same three photographs, reveals just how little the three jars changed over the course of the second month.

The love jar remained basically clean. In fact, those strange waxy circles on top of the water diminished during February. The difference in coloration you see in the two photographs is due to taking them in different light. (Who is that woefully amateurish photographer anyway? Oh, right. It’s me. I’ll get better. I promise.) 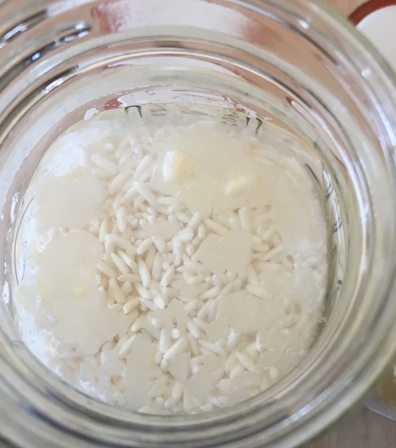 Day 30: The water in the “love” jar is mostly clear, rice grains visible and clean; thin, waxy-appearing circles float on the surface; 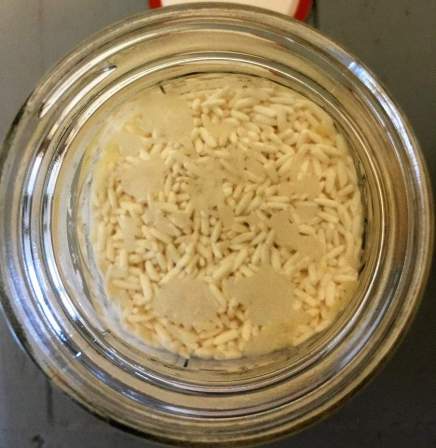 On February 27, the water in the “love” jar is still clear and fewer, smaller waxy pads sit on top than at the end of January; the rice appears mostly unchanged as well, though a pinkish tinge shows up here and there

(To zoom or to see the captions, click on one of the images.)

The other two jars changed a little in February, though not as much as expected. Here’s the “idiot” jar, looking down from above, at the end of January and again a month later. The waxy-looking “cells” around the edges appear to have liquefied. A pink tinge permeates the top. The rectangular, black mold clumps changed little.

Day 30: The “Idiot Jar” has a layer of discolored and fractured waxy-appearing “cells” on most of the perimeter, with colonies of white, orange-brown, grey, and rectangular black mold covering three-fourths of the surface

The top of the jar shows far more spoilage (smells it too), the water brackish-looking and funny little round pustules popping up between the mold and pink slime

Now take a look at the jar to which I paid no heed in January and, like the others, sent loving thoughts each day in February.

Day 30: Thick pink and white pillows with black, star-shaped centers fill most of the surface, surrounded by cloudy, brownish liquid

Like the “idiot” jar, the top of this one shows more spoilage than a month ago and the “pillows” seem to be crunching in on themselves

The moldy star-shaped pillows seem to have grown slightly thicker and appear more convoluted. The water is fetid, murkier.

What about the smell?

By the end of February, I was concerned about the odor. While not strong, it scented the air, vaguely unpleasant, each time I opened the back door. We share this common area with another apartment on this floor, as we share the rear stair well with all apartments on this side of the building. What did the neighbors think? I may never know. We’ve not met the people who share this back-door landing with us! City life.

On the last day of the month, I girded my gag-reflex loins, as it were, and in the interest of amateur science carefully removed the lids and took a whiff, one at a time. The love jar? Still not too bad. Not as pleasant now as at the end of January, and with an undertone of spoilage, it still smelled slightly sweet and vinegary. The other two jars? I nearly lost my cupcakes. Those babies had to go.

Conclusion and next steps

Clearly, my loving thoughts did nothing to cleanse the rice and water in the “bad” jars. But I couldn’t help wondering whether they may have inhibited spoilage and mold growth. Had I continued to curse and ignore, or simply let Nature takes its course, would the mold and rot have spread significantly?

What about the love jar? The contents deteriorated little in this second month as well.

Surprising outcome, don’t you think? So this month, since March 1, I have continued the love jar experiment, and added three new jars. Every day, I send the same loving thoughts to each jar–all four of them. 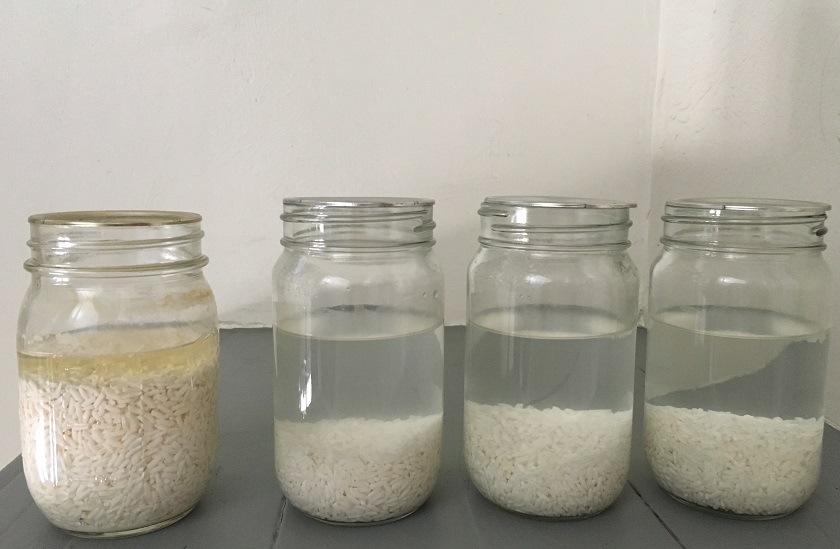 The original “love jar” plus 3 new water and rice jars

Will sending kind thoughts to a new batch of jars produce the same results as last time? Will one, two or all three of the mixtures sprout mold or rot? Will they all stay fairly clean and untouched by bad bugs? How will the original love jar change?

What about fluctuating temperatures? The micro-climate in which these jars must sit changes daily, sometimes hourly. Temperatures can be near freezing one day and near eighty the next. Colder temps likely retard bacterial growth, preserving the rice, while warmer temps should promote fermentation and/or decay, right? And then there’s the love. We’ll see what happens.

Stay tuned for my April report on the March rice madness.

Come on in. Sit a spell. Have a cup of tea. I'm YayYay (Kathryn to the grownups), and in my kitchen, good stuff happens.

Food.
Fun.
Shopping locally.
Cooking together with fresh, whole, organic ingredients.
Living mindfully.
Laughing a lot.
Forgiving ourselves and each other.
Giggling every chance we get.
Giving gratitude each and every day.
Taking action now and then—more now than then.

That’s what I’m aiming for.

What we eat, where and how it’s grown, how we get it, how we prepare it, and who we share it with affects every thing and every one: Soil, water, air, climate, planet; health, relationships, education, workers, social justice.

All my recipes use organic ingredients and mostly fresh, whole foods. Here at Chez Grace, when we occasionally cook with meat, and whenever we cook with dairy or eggs, we use organic, pasture-raised, grass-fed and free-range. I rely on the researchers and their scorecards at Cornucopia for up-to-date brand/farm resources.

L Kathryn Grace All text and images on this site, unless otherwise noted, are my own. All rights reserved. Should you wish to quote me at length or to use any of my photographs, please contact me.
Loading Comments...
%d bloggers like this: