According to my King Arthur Whole Grain Baking book, today is the last day I need cultivate my stiff levain before using it in my first boule. Now, I have to confess, I goofed up here.

Last night, around seven o’clock, I refreshed the levain. This morning, a little after seven, in the midst of a downpour, my wee granddaughter arrived. We shook off our wet things, bundled up dry and warm, and set to playing. We were having so much fun, I didn’t stop to feed the levain until late morning. Priorities!

So we got a late start feeding the levain–nearly five hours late, but it appears none the worse for wear.

Here’s how the levain looked when I set it to incubate last night. 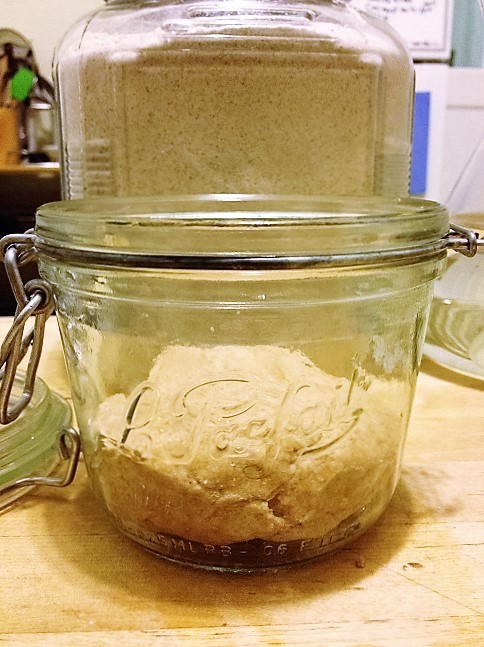 The levain, just fed, and ready to incubate overnight

By morning, the levain had nearly doubled, just barely, puffing the top into a dome. Was it ready? I wasn’t sure. But we had bubbles! Small bubbles, but bubbles.

The dome felt stiff on top, not spongy. Some of the flour grains rested on top. Had I failed to mix it well?

Domed levain after rising over night

Thankfully, although the dough felt stiff on the outside, inside it was fluffy, spongy, moist and full of tiny holes, signifying yeast at work, producing gas.

Despite the stiff-looking exterior, inside the levain is spongy, airy and full of small-to-medium-sized bubbles

The two-year-old likes to cook and bake with me, so when I divided and fed the starter, I gave her a small bit with some flour and moisture in a bowl of her own.

Together we smashed and smooshed the mixture in our respective containers until the forks could do no more. Then we got down and dirty, kneading the remaining flour into the starter with our hands until it was fully incorporated.

That is, I did mine. She soon tired of playing with dough and ran back to making original artwork with her markers and paper. I finished my part and set it in its jar.

I gave the tyke a bowl of levain, flour and water of her own to mix, and each of us worked the flour into our starter

Fed and ready for the yeasts to do their gassy, burpy, gurgly thing, on this cold, windy, wet day, the levain could incubate only one place–in the oven, with the light on. 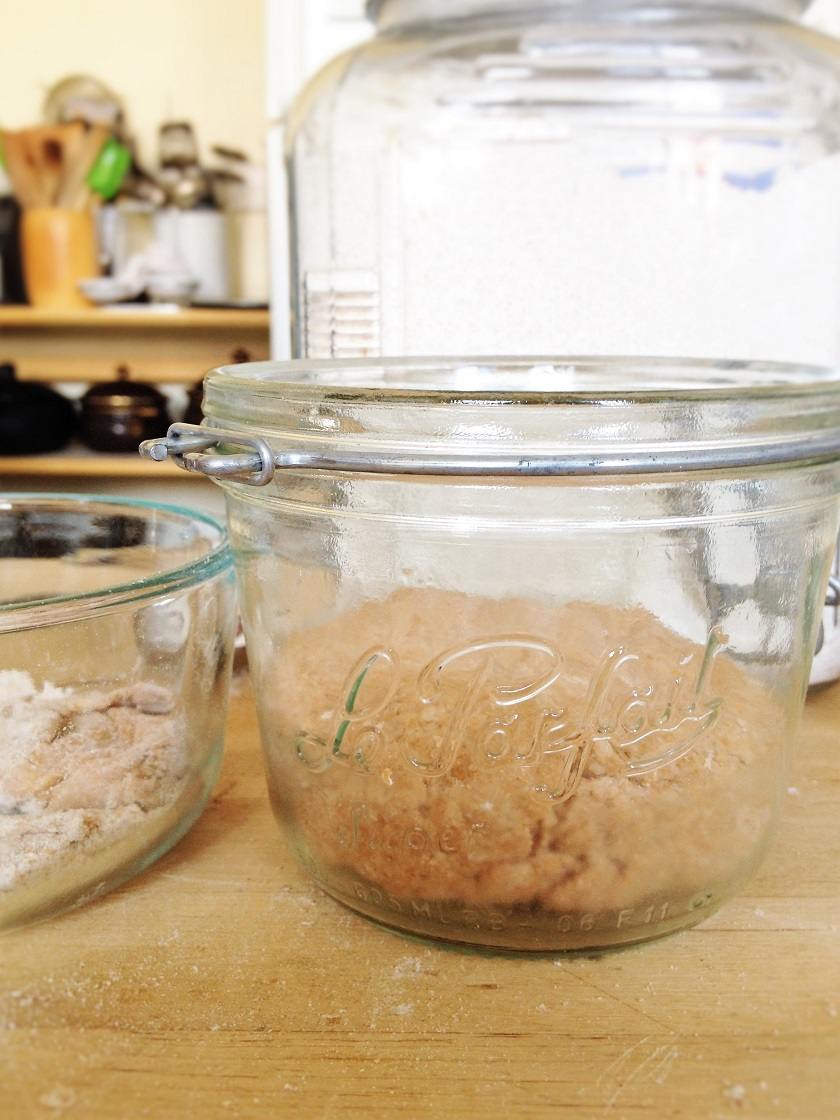 The levain, fed for the first time today, ready for a nice long incubation in the light-warmed oven

By 11 pm, the levain appeared not to have risen much.  In fact, it appeared nearly dead on the outside, but inside was bubbly and moist. I fed it as usual and set it to incubate one last time.

The starter rose some, but did not quite double in the last twelve hours

We’ll see how it looks in the morning. All goes well, I get to make my first boule using the King Arthur method. I’m excited to give it a try!